I. Ghosts in the Graveyard

The others went to the table and closed their eyes as they counted out loud the ten seconds I had to hide. I hid in between two of the fluffy bushes, the ones closest to the far corner of the house. I tried to be as quiet as possible. Didn’t want to draw too much attention to where I was. I didn’t want to be too easy to find. The person who discovered me would shout, “Ghost in the graveyard. Run, run, run!” I’d chase after them as they ran back to the safe spot. Whomever I tagged would be the next ghost. If they all ran faster than me, then the last one back to the picnic table, the safe spot, would be the next ghost.

I pressed my back against the rough texture of the bricks at the base of the house, hoped the roundness of my shape would blend in with the roundness of the bushes. Part of me didn’t want to be found. I felt comfortable hidden.

Meet Bruce Owens Grimm, weaver of fantastic tales of ghosts haunting the hallways of our memories. While he doesn’t claim to be a witch, his writings pull you into an enchanted world as if you’ve snuck into his study and began reading his grimoire. What initially attracted me to Grimm’s writing is his bold acknowledgement of the power our past has over our present. In his world, exorcisms are as common as sweeping and mopping (which admittedly I do far less than I should).

Recognizing the power in a name, Grimm recently changed his to dissociate himself from his abusive father and neglectful mother. In his latest work, Bruce demonstrates his desire to distance himself from his former name isn’t born of cowardice; “Reclaiming the Pansy” – an essay recasting an often-used derogatory term for queer folx. Instead, he courageously shares intimate parts of his struggles with suicide attempts and other mental health issues in his writing.

Knowing there are LGBTQ youth daily fighting their own monsters, ghosts and demons is a primary reason for my Monsters Beneath My Bed blog. So, when I came across another out and proud gay writer (the current President of the LGBT Writers Caucus no less) openly discussing mental health issues stemming, in part, from growing up queer, I naturally wanted to get to know him.

I was honored when he agreed to share some of his story with me to share with you. He did want me to tell you there is discussion of suicidal thoughts in this excerpt and to provide the number for The Trevor Project for LGBTQ youth who may need someone to talk to or text with: (866)488-7386 – available 24/7.

With those introductory notes, I take us back into Grimm’s spellbinding world of Inventory of a Haunted House, No. 2: 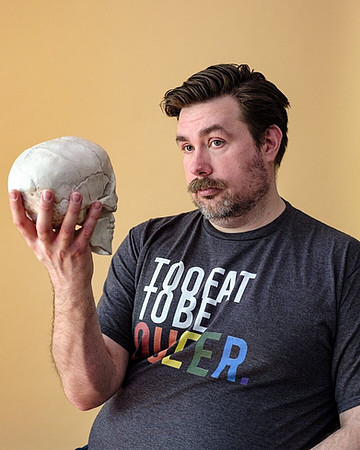 Family lore has it that I almost drowned when I was two years old. My paternal grandparents and my parents had gone to Myrtle Beach for vacation to escape the coldness of Cleveland. The story goes, my father put me in a float shaped like a blue car. He held the front of it as he guided it over the ocean waves rolling towards shore where my mother and grandparents watched us. I cannot remember this moment, but I have heard the story so many times, seen pictures of the day that I can imagine it in my head as I write this. I can see the grayness of the water. The grayness of the cloudy sky. The white of the wave’s crest. I can see how the blue of the float pops against the drabness of the rest of the landscape. I can see the shapes of my family. I can see my then blonde hair, which will darken to almost black as I grow older. But I cannot see my face or their faces. It’s like a dream. I’m an observer, not a participant. The water becomes choppier, and this is where I can no longer see.

As the story continues, a wave hits my floating blue car in such a way that it folds the bumper towards the fender, covering me, and when the float pops open, I’m ejected. Catapulted into the water, as my father described it. I do not rise to the surface. My mother. My grandmother. My grandfather. All of them shouted, “Find him. Find him. Find him.”

My father waded through the water as he stuck his hands in various spots trying to find me.

“The undertow is going to get him,” my grandmother said. She always worried about the undertow pulling one of us out to sea.

He found me. I lived. But perhaps the water felt cheated. Perhaps it waits to claim me.

Lake Michigan is down the street from where I work. If you stand outside, in the middle of Chicago Avenue, you can see it, the mass of water shouldering the city. One morning I open, which means taking a car down Lakeshore Blvd at four thirty in the morning. I do this instead of hopping the train because it’s quicker and I want to sleep a few more minutes. There is a pink band of light where the sky meets the lake. The water seems to ripple away from the shore as if beckoning me to join it. I look forward, toward the road, the skyscrapers looming ahead. I look back toward the water. There are two round structures near where the water and sky meet. A light flashes on one side. It’s a water crib, a water purification plant, which creates the water supply for Chicago out of Lake Michigan. It also seems to call to me, “come here, come here, come here.”

The water crib has my father’s voice. He died nine years ago, but six months ago it felt like he stood behind me on my left side. Therapy. Medication. Ritual. All three had helped lessen that sense of near invasion, made it almost disappear. But my medication no longer kept my depression at bay. Therapy and ritual were not enough. The ghost had returned from the graveyard and now I wanted to join it.

I imagine the cold water embracing me as the sun rises. I imagine succumbing to it, drinking it in as I swim out towards the water crib. Perhaps it was how I simply justified throwing myself to the water. Perhaps it was the way I’d be less afraid of offering myself to the water if it meant that I could finally know what it meant to be protected by my father instead of assaulted by him.

I make it to work. I can keep ideas about killing myself contained as long I’m moving around, talking to co-workers or customers. Fatigue starts to set in. I can’t keep my smile up. I can’t keep my voice perky. I stand at the counter, behind the register, and stare out the window. I imagine the lake, the water crib. It’s only a few minutes walk-up the road to the lake. I had escaped the water once. Maybe it was time to surrender. To disappear.

Please join me next week for the second half of this story as we bring LGBT Pride Month to a close.

One thought on “Inventory of a Haunted House, No. 2: Bruce Owens Grimm”