When I finally stopped to listen to the still, small voice inside my head, the one that I think has been suffering the consequences of my ignoring it, this is what I heard. The tears that came flooding into my eyes, and the constriction of my throat gave me all the confirmation I needed to believe him.

A part of me was frustrated. We have been through this before. In fact, we had dedicated almost a year’s worth of weekly EMDR sessions preparing to battle the Sparkly Man and my abusive stepfather. I had assembled my protective parts, learned how to work together, and gone deep inside to save my little abandoned whipping boy.

I tried a different approach. I had already settled into my normal morning routine—dog curled up at my feet, warm cup of coffee, laptop, recliner. I had quieted my mind so that I could hear from the part of me that I had exiled from my daily life, the part that had been crying out for attention in the form of migraine, gripping anxiety, procrastination, impostor syndrome, and, a true sign I needed to start paying attention, fleeting thoughts that being dead might be better than being here.

So, I grabbed my journal to hand write my thoughts. I allowed words to flow freely from my pen, making no real sense. Just let the words flow – my imagined voice of Julia Cameron from the Artist’s Way joined Josef Breuer’s encouragement from the 1880s for me to “chimney sweep” about my fears.

Words fell onto the page, not making much sense.

But still, I wrote them. 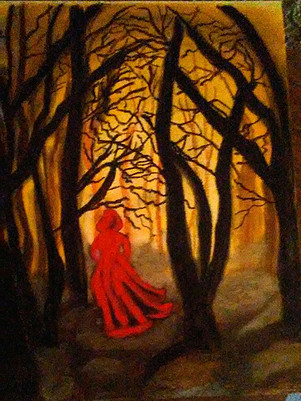 I thought of a picture my friend Nicole had in her recent art show. For some reason it floated to the page’s surface and grabbed my attention. Last month, when I told her how sad I was to learn it had sold, she offered to make me one! Just a few days ago I had hung it on my office wall.

I wrote about the painting.

Feeling the undulation of emotions it stirred.

I was getting closer.

Suddenly, the ethereal voice of Jesse, one of my protector parts, hauntingly sang out from my subconscious…

Who’s afraid of the big and bad …

And I heard his timid and terrified voice.

My writing stopped. I pushed back against the angry and frustrated parts of me that rolled their eyes. This part of me had somehow been forgotten, overlooked during dozens of EMDR sessions. He was a master at hiding, but now, his loneliness, the years of being abandoned, were too painful.

Now, after three years, the big bad was on the prowl again and this terror overrode his desire to remain unseen. He must have a glimmer of hope he might be saved this time.

As soon as I quieted the angry and frustrated parts of me, I knew where to find him. I had been 7 years old. I was still living in the torturous home ruled by my stepfather. I had awoken from a nightmare about a shadow man, covered by multicolored lights. I had called him the Sparkly Man.

This time, he didn’t just whip me and lock me in my room. After my beating, he dragged me off the bed, threw me over his shoulder, and carried me outside. I could barely hear him through my panicked sobs.

“I’ll show you there’s nothing to be afraid of you whining brat!”

As he tossed me in a crumpled heap on the ground, the acrid taste of a split lip hit my tongue. Slobber, tears and blood ran down my mouth, onto the gravel of the driveway.

Slam! …Click. My stepfather had locked me out, a sacrifice to the Sparkly Man. My memory of what happened next that night is a dissociative blur. Even after reprocessing it in therapy sessions, my mind is an unrelenting vault of secrets. But now, here I was, hearing a terrified little voice finally brave enough to let me know he had somehow been left behind.

Reaching through the rift in time, I stepped onto the scattered and dusty quartz driveway, knelt down beside this wounded child, and gathered him into my arms. The twilight reunion caused floodgates to open.

Then, exposed, now safe in my own home. Then, thrown on the hard ground, now sitting in my recliner. Then, abandoned, now with my dog. Then defenseless, now my journal, my parts, all of me. I observed as Jesse and my other protective parts emerged into this little boy’s psyche. They knew what to do. As my beaten and abandoned part was enveloped by Jesse’s shawl of protection and my eccentric “animal cracker grandma” part prepared my mental safe place for yet another refugee, deep, guttural waves of grief poured out of me.

This was only the begging of the healing process for this part. I knew what had triggered his fear now. I was able to recognize how, the memory of my stepfather, who had died years ago, had awakened this fear within. A couple of people who had left my life 3 years ago were wanting to come back. They had subconsciously reminded me of my abuser. To this abandoned child-part, it was the same person who had sacrificed him to the Sparkly Man and the same person who didn’t rescue him then. Now though, now, I could rescue myself.

All my protective parts assured him as he curled up inside my safe place and, for the first time in over 4 decades, was allowed back inside.